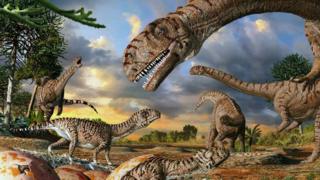 Dinosaurs like the fearsome T-rex may have had lips to cover up their teeth.

New research suggests theropod dino teeth are too well preserved to have been exposed in a fierce grin all day.

"When we see dinosaurs in popular culture, such as in the movie Jurassic Park, we see them depicted with big teeth sticking out of their mouths," says Dr Robert Reisz from the University of Toronto.

"We imagine dinosaurs as more ferocious looking, but that is not the case."

Very little is known about what dinosaur skin and muscles were like, as usually only dinosaur bones are preserved.

So Dr Reisz decided to study modern day reptilian predators for clues, like the crocodile and monitor lizard.

Crocodile teeth stick out on the outside of their mouth, but their teeth are protected because they spend most of their time in the water.

Monitor lizards are land creatures. Their teeth are covered by gums and scaly lips, which are there to stop their teeth from drying out.

The T-rex also lived on land so it's thought it had lips like modern day lizards to help protect their pearly whites.