BGT: 100 Voices of Gospel and Mel and Jamie through to final 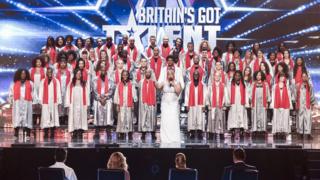 100 Voices of Gospel and Mel and Jamie have become the first two acts to bag themselves a place in the Britain's Got Talent final.

Alesha's Golden Buzzer act, 100 Voices of Gospel, were the first to go through in last night's first live semi-final.

The choir topped the public vote after singing Got My Mind Set On You.

Judge Simon Cowell said that the choir were in a "different league" to the other acts, and were "by far the best choir" he had seen on the show. 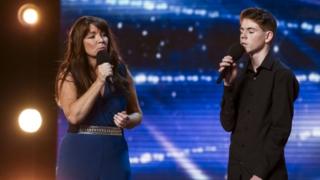 Singing mother-and-son duo Mel and Jamie were second to go through.

They performed a rendition of Miley Cyrus' The Climb, but ended up in a tense showdown against fellow singer Kathleen Jenkins.

The judges couldn't decide which of them to send through to the final, so it went back to the public vote, with Mel and Jamie triumphing. 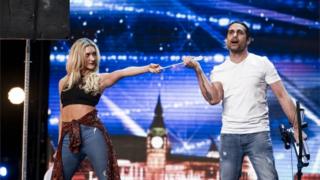 As part of magician Ben's performance, he asked judge Alesha Dixon to help him out by pulling four levers which would fire arrows towards him.

However, a technical problem meant that two arrows shot out at once instead of just one, leaving everyone a bit surprised!

But Ben carried on and finished his performance safely.