Missing Nigerian girl found after being kidnapped by Boko Haram

A girl who was kidnapped by extreme Islamist group Boko Haram in West Africa two years ago has been found.

Amina Ali Nkeki was one of 276 schoolgirls taken from a school in Chibok in Nigeria in April 2014.

Some managed to escape but 219 were still missing.

Boko Haram took the girls because they are against children getting an education, like in the UK.

The 19-year-old is now back with her mum. 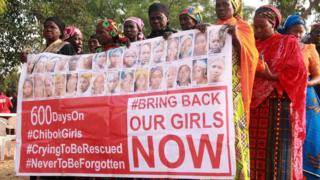 Some people came together and formed the #BringBackOurGirls campaign, including US First Lady Michelle Obama, the Prime Minister David Cameron and education campaigner Malala Yousafzai.

The Bring Back Our Girls campaigners and relatives of the girls marched in Nigeria to demand more be done to rescue them.

The search for the other girls is continuing but the families still waiting for news say Amina's rescue has given them fresh hope.

Amina was flown to the country's capital, Abuja, for a meeting with the Nigerian president, Muhammadu Buhari.

The Nigerian military's senior spokesman says he's optimistic that all the girls kidnapped by Boko Haram from Chibok school will be rescued.

Who are Boko Haram?

Schoolgirls kidnapped by Boko Haram are not forgotten