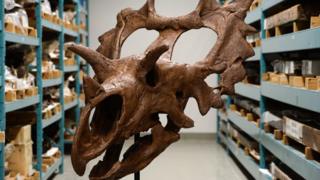 Sean Kilpatrick/The Canadian Press
This is what the Judith's skull was like.

Fossils of two new dinosaurs have been discovered in America and one of them has been named Judith!

It came from the Judith River rock formation in the state of Montana and that's how it got the nickname. 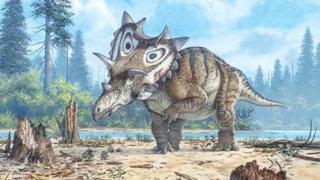 Reuters
What dinosaur experts think the Spiclypeus would have looked like.

Dinosaur experts think Judith was about 4.5m long, had big horns sticking out to the side over its eyes and spikes at the back of its head pointing in different directions.

The other dinosaur discovered was the Machairoceratops, which was almost twice as long.

Scientists say it had two large spikes coming out of the back of its head, horns over its eyes and possibly a horn over its nose.

Both dinosaurs were relatives of the Triceratops and were four-legged, plant-munching beasts that are thought to have lived more than 75 million years ago! 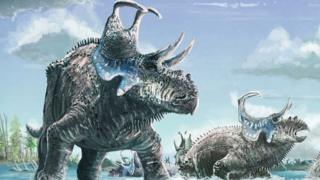 Reuters
A drawing of what the Machairoceratops may have looked like.