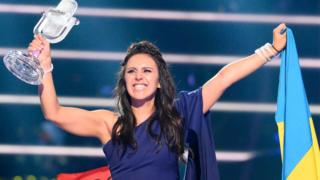 Ukraine's Jamala has won this year's Eurovision Song Contest in Stockholm in Sweden.

The UK's Joe and Jake had a disappointing night, coming third from the bottom with 62 points.

Jamala was a surprise winner of the contest, as Russia had been the hot favourite.

Collecting her trophy, she thanked Europe for their votes and said: "I really want peace and love to everyone."