How to watch Mercury pass the sun today 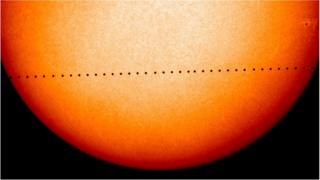 Between about midday and eight o'clock tonight it's possible to see the planet Mercury.

It will be passing between the Sun and the Earth, so will appear as a tiny black dot moving over the face of the Sun.

Mercury only passes in front of the Sun a few times every century, and the last time was a decade ago.

How can it be seen?

The first thing to know is that you should never look directly at the Sun, because it can seriously damage your eyes.

Special glasses used to view solar eclipses are also pretty useless - Mercury is so small that magnification is needed to see it.

That means a special solar filter is needed for telescopes, or a projected image of the Sun on a piece of paper - get a teacher or adult to help you with this.

If that sounds like too much fuss, there is a far easier way to see it: by watching one of the numerous online live streams.

Both the European Space Agency and NASA say they will be broadcasting the event.

Where can it be seen from?

It's visible from most of Western Europe and North America on Monday 9 May between 12.12pm and 7.42pm.

How to watch the solar eclipse on Friday