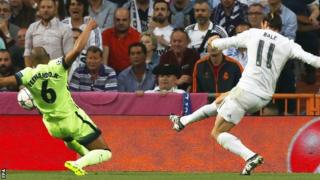 Manchester City have missed out on their first Champions League final after an average semi-final second leg performance at Real Madrid.

After a goalless draw in the first leg, Real took the lead when Gareth Bale's deflected cross hit the back of the net.

But it was later officially recorded as an own goal by Fernando.

Ten-time winners Real will now meet Atletico Madrid in the final on 28 May.