Plumber-turned-inventor Colin Furze has made some pretty amazing creations, and his new hoverbike is no exception!

He created his cool new rider over a few weeks in his garden shed.

The contraption may not go as high as some other flying crafts, but Colin is pretty pleased with it given it's his first time making something that flies.

Watch the video to see Colin test it out and take a look below at our rundown of some other amazing flying machines! 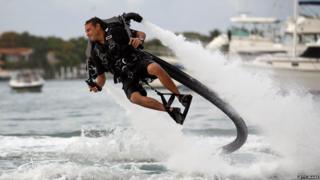 Water jet packs, or aquatic jet packs, like this one are becoming really popular in holiday resorts around the world.

It sucks up water into a backpack and then blasts it back out of two pipes on the side, lifting you high above the water. 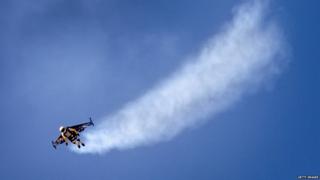 Getty Images
Check this out! Yves Rossy, or Jetman as he is known, flies through the sky using a jet-powered wing that he wears on his back

He's known as Jetman, but his friends call him Yves Rossy, and he's developed this special wing with jet engines attached to it.

Yves' jet pack can reach speeds of over 150 miles an hour - quick enough to keep him speeding through the sky.

This hoverboard, developed by a car company in the US, uses a clever system of magnets to allow it to float above the ground.

Cool as it looks, don't get too excited about finding one in your Christmas stocking this year - the hi-tech boards are not available to buy.

What will the future be like in 30 years time?