Children and teenagers have been among the thousands of people remembering the Hillsborough disaster victims in Liverpool city centre.

A special service was held at St George's Hall on Wednesday evening to remember the 96 football fans who died in 1989.

These people tell us why they came to pay tribute. 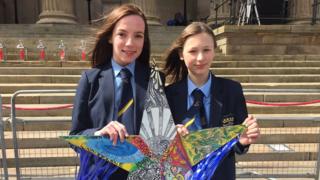 May and Lizzie came to the memorial with a sign that they made at school. It has 96 messages of support for the families of those who lost their lives.

Two of the messages...

"I pray that all those who were lost in the Hillsborough accident are always remembered and respected. I also pray that the innocent fans who got the blame will get justice." 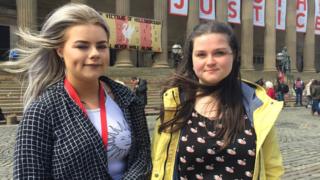 Libby (right) tells us her granddad was at Hillsborough in 1989. She says people in Liverpool are overwhelmed by the inquest decision and that she was tearful when she heard the news yesterday.

Libby says: "Everyone is overwhelmed and so happy about the outcome. They want everyone to know that it wasn't the fans' fault." 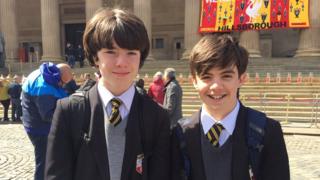 This is Joe and Zac. Joe says that his dad was going to go the match, but that his dad's mum wouldn't let him.

Joe says: "He's always cried because it's such a touching story."

Zac says: "They've been waiting for justice for a long time and they've finally got it... It's important for them to never forget about what happened."

Guide: What was the Hillsborough disaster?

'It affected everyone': Merseyside pupils react to Hillsborough decisions

How can a plastic bottle turn into vanilla ice cream?