Is snow in April unusual? 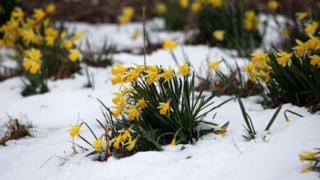 It's almost May, but this week lots of parts of the UK have been surprised by flurries of snow and hail, and wintry weather.

Some have been enjoying the snow, especially in areas where it has been thick enough for skiing and sledging, but for others it's caused disruption.

But scientists from the Met Office, who monitor the weather, say that snow isn't actually that unusual at this time of year.

It's often a chilly month - between 1981 and 2010, the UK had an average of 2.3 days of snow in April. That means it's more common to be able to build a snowman in April than it is in November!

And in 1981 it was particularly dramatic - on the 25th of April that year more than 29 centimetres fell in Sheffield.

The current cold temperatures can be blamed on air coming to the UK from the freezing Arctic.