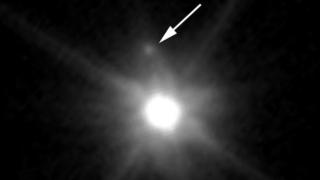 The Hubble space telescope has made another amazing discovery - a tiny moon circling the dwarf planet Makemake.

Makemake is only 870 miles wide, much smaller than planet Earth, and its newly discovered moon is just 100 miles across.

The team who found the moon says it was hard to spot because of how bright Makemake is.

The mini planet is part of the Kuiper belt, an area beyond Neptune that also includes Pluto.

Makemake was previously thought not to have a moon, unlike the other dwarf planets near it. Now it's no longer the odd one out.

For the time being, Nasa has called the new moon MK2. Hopefully it will be given a more memorable name in the future.