Guide: What was the Hillsborough disaster? 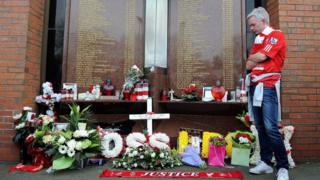 PA
A Liverpool fan looks at tributes at the Hillsborough memorial at Liverpool's Anfield stadium.

On 15 April 1989, at an FA Cup semi-final, Liverpool supporters gathered on the terraces of Sheffield Wednesday's ground, Hillsborough Stadium.

The question of how the accident happened and who was to blame has been a controversial one.

A formal investigation, called an inquest, decided that those who died at Hillsborough were unlawfully killed. This means that their deaths were not an accident, but that organisations made mistakes that led to the disaster.

More than 24,000 Liverpool fans travelled to Sheffield for the 1989 FA Cup semi-final match against Nottingham Forest.

As they waited for kick-off, a large crowd built up outside Hillsborough stadium. When a gate was opened, thousands of fans went into an already busy part of the ground and many of them got caught up in a crush.

Who were the victims? 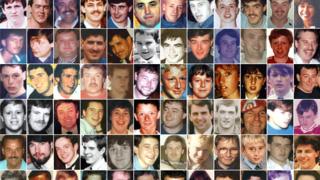 Some of the victims of the Hillsborough disaster

All of the people who died were Liverpool fans who had travelled to Sheffield to support their team. Most of the victims were from Liverpool and Greater Merseyside. Others came from different parts of England.

38 of the victims were children or teenagers. The youngest was ten year old Jon-Paul Gilhooley.

He was cousin of footballer Steven Gerrard, who went on to become the captain of Liverpool FC.

Why is it important today? 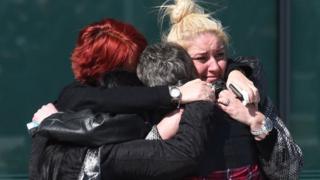 PA
Relatives of the victims hug.

Families of the people who died campaigned for many years to find out what happened on the day of the disaster.

After it happened, there was a big investigation into what had gone wrong.

This original investigation, called an inquest, came to the decision that the deaths had been an accident and that no-one was to blame.

Many were angry and thought that the disaster hadn't been properly investigated.

People were also upset when some police and newspapers said that the fans themselves were to blame.

In 2012, a High Court decided that the conclusions made by the investigators were not satisfactory, and that another inquest was needed.

What is an inquest?

An inquest is an investigation into when, where and how a person died.

A group of people called a jury are given information about what happened. This information comes from lots of different places, like accounts from people who were there, police reports and details of the lay-out of the stadium.

The jury then have to consider all of the information that they've been given and come to an agreement on what happened and why.

What is the result of this inquest?

The inquest has decided that the 96 people who died at Hillsborough were unlawfully killed. This means that their deaths were not an accident, but that the police, ambulance service and other organisations had made mistakes that led to the disaster.

They said that the Liverpool fans were not to blame for the dangerous crowding that led to the accident at the stadium.

The inquest also said that the way the stands at the stadium were designed contributed to the disaster.

After the disaster, changes were made to football stadiums to make them safer, and to stop an accident like this from ever happening again.

Traditionally, stadiums used to be made up of fenced-in terraces where fans would stand to support their teams.

Now, all stadiums have to be all-seater. That makes it much easier to manage the crowds and make sure everyone has enough room.

There also have to be a certain number of stewards working in each area of the stadium to look after people. 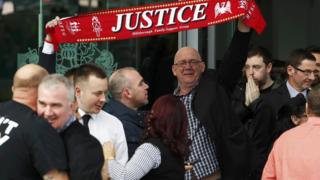 Reuters
Families of the victims celebrate after hearing the decisions of the inquest.

'It affected everyone': Merseyside pupils react to Hillsborough decisions