It's been one year since Nepal was hit by a massive earthquake. The country is still rebuilding and aid agencies say millions of people remain homeless.

Nepal is a small country between India and China and is home to Mount Everest, the tallest mountain in the world.

It is a very poor country and many of the houses there were not built to cope with an earthquake of this size.

More than eight million people were affected by the earthquake - roughly a quarter of the country's population - the United Nations said.

According to one charity, Unicef, one million of those affected are children.

A powerful earthquake struck in the morning of morning of April 25 2015, between the capital city of Kathmandu and another city, Pokhara.

The earthquake had a magnitude of 7.8 - which means it was very strong - and tremors were felt in nearby countries Pakistan, Bangladesh and India.

A second strong earthquake, magnitude 7.3, hit eastern Nepal, near Mount Everest on 12 May 2015. More than 100 people were killed and thousands more injured.

Many of the country's historic sites were severely damaged, including temples and monuments. Nearly 9,000 people died.

Thousands in Kathmandu, Nepal's capital, had to sleep outside and water and electricity was in short supply.

The Nepal government asked for help from other countries - everything from blankets and helicopters to doctors and drivers were needed.

Help and supplies from all over the world were flown into the country.

Aid agencies used helicopters to get help and supplies to people who live in remote mountain areas, which were difficult to get to.

The priority for rescue agencies was to reach people who were trapped or injured, and provide shelter and protection to those who lost their homes.

It's not just the towns and villages where people needed help. Hundreds were rescued from near Mount Everest, the world's tallest mountain.

Even though the centre of the earthquake struck more than 120 miles away from the mountain it had a major impact on climbers there.

Avalanches caused by the tremors killed at least 18 climbers and injured more than 60.

Helicopters were used to rescue mountaineers trapped on Everest.

A year on and there are still a lot of problems to deal with after the earthquake.

BBC Correspondent, Justin Rowlat says virtually none of the 800,000 buildings it's reckoned the quake destroyed have been rebuilt.

According to charity, the Red Cross, four million people are still living in temporary shelters.

People met at the remains of a historic tower in Nepal's capital Kathmandu that collapsed in the devastating earthquake to pray and lay wreaths for those who died. 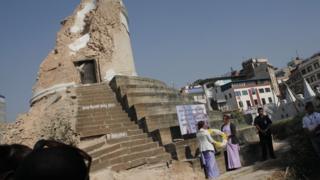 How charities are helping Nepal