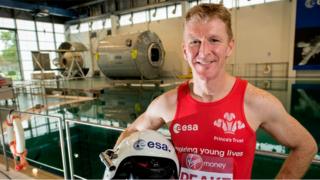 Tim ran the distance of the London Marathon, 42km, on a treadmill on the International Space Station (ISS) in three hours and 35 minutes.

To counteract the effects of weightlessness, he used a harness to keep him on the running belt.

Before the event he said: "I'm quite glad that this is happening later on in the mission so I've had plenty of time to get used to the treadmill."

Elastic straps over the shoulders and round the waist keep Major Peake in contact with the running belt of the treadmill.

The straps are designed to give astronauts' bones and muscles a workout in weightlessness.

He said: "One of the biggest challenges is the harness system. Obviously, my bodyweight has to be firmly attached to the treadmill by this harness, and that can rub on the shoulders and around the waist."

It's not the first time he's run a marathon - in 1999 he finished the London Marathon in three hours, 18 minutes and 50 seconds.

He did not try to beat that time as his medical team wanted to ensure he was perfectly healthy for his return to Earth in June.

Major Peake started at the same time as the other runners: 10:00 BST on 24 April.

How to get a good night's sleep in the heat

How Prince William's Earthshot Prize aims to save our planet

Amazing fossils of sea creatures discovered in the UK