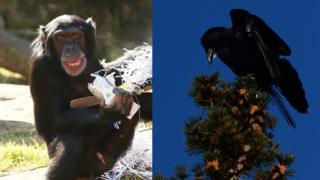 Researchers in Sweden, testing animal intelligence, have found that ravens are as smart as chimps, despite having much smaller brains.

Being called 'bird brain' is normally an insult, but the raven's small brains didn't stop them from performing just as well as chimps at an intelligence test set by scientists.

Researchers from Lund University in Sweden challenged the animals to complete the same tricky task - to get food out of a tube.

First, they showed the birds that they were putting a treat in a tube with a hole at each end, so that they would know how to go through the hole to reach the treat.

Then they repeated the test, but using a see-through tube so the animals could see where the food was.

They wanted to see if they'd still understand that they needed to go through the hole to reach it, or if they'd hit against the tube sides instead.

They say that their results show that having a small brain doesn't mean that an animal will be less intelligent.