President Obama visits UK to talk about the EU referendum 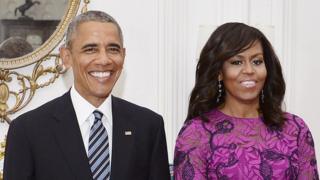 US President Barack Obama is in London to talk to Prime Minister David Cameron.

He's made the visit to talk about a vote called a referendum due to happen on Thursday, 23 June.

It will ask people in the UK if they want to remain in, or leave the European Union also called the EU.

The EU is a group of 28 countries which share some laws and trade with each other.

President Obama says he thinks the UK should stay in the EU but some people disagree.

The US President says it's important for Britain's place in the world to stay in the EU but people who want the UK to leave say that isn't true and that American politicians should not be telling voters in the UK what to do.

All you need to know about the EU Referendum