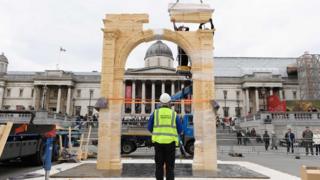 An ancient monument in Syria that was destroyed has been recreated using 3D printing technology, and put on display in London's Trafalgar Square.

The original arch was built by the Romans in the city of Palmyra 2,000 years ago.

In May 2015, Palmyra was taken over by the so-called Islamic State group, which damaged many of the buildings.

The city was recaptured by forces loyal to Syrian president Bashar al-Assad in March 2016.

Palmyra is thought to be one of the most important cultural centres of the ancient world. It's a United Nations World Heritage Site.

A team from the Institute for Digital Archaeology have studied photographs of the original arch and used 3D technology to build a model of it from Egyptian marble. 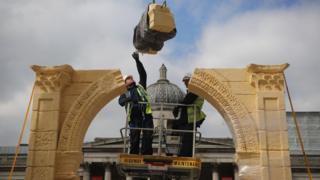 The arch will be on display at Trafalgar Square for three days, before being taken on a tour of other cities around the world.

The plan is then to take it to Palmyra itself next year, where it will be displayed near to where the original arch used to stand.

Ancient Syrian city of Palmyra taken back from Islamic State