A powerful 7.8-magnitude earthquake has hit the country of Ecuador in South America.

The quake happened at 11.58pm (UK time) on 16 April near the northern town of Muisne. There have also been a number of smaller aftershocks.

Severe damage has been reported over a large area with buildings and roads damaged.

Around 13,000 soldiers and police officers are being sent to help people who have been affected.

It's Ecuador's largest earthquake since 1979.

The country's president Rafael Correa has announced a state of emergency.

He said: "This is a very painful test. I ask the country to be calm and united... Let's be strong; we will overcome this." 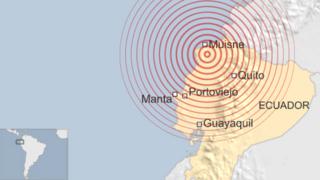 Why do earthquakes happen? Read our guide to find out.

Rescuers are searching towns damaged by the quake and emergency services are working to help the injured.

Serious damage was reported in the city of Manta, where people are without power and phone lines and an airport tower has been damaged.

The earthquake could be felt in neighbouring countries Peru and Colombia.

How kids prepare for an earthquake in Japan