Aston Villa have been knocked out of English football's top division for the first time since 1987 after defeat at Manchester United.

Villa were second best for much of the game, although Rudy Gestede's volley did hit a post late on.

It was a ninth straight loss for Villa and left them 15 points from safety with only 12 points still up for grabs. 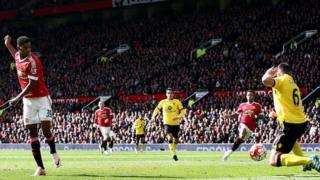 Aston Villa caretaker manager Eric Black said: "It's a mood of disappointment. What I will say is today I thought [the Villa players] were outstanding - energy levels, desire to stick to the plan.

Manchester United manager Louis van Gaal said:"We have three points and make some distance from Southampton and West Ham, so the three points are very important. I'm not too happy with the performance. We have to finish the games a lot earlier and today we didn't do that."