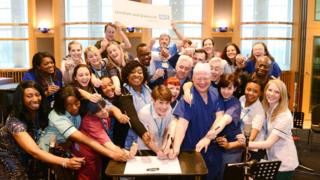 PA
The nurses and doctors of the NHS choir signing the record contract.

The National Health Service choir which beat Justin Bieber to the Christmas number one last year, has now been signed to the same record label as him.

The choir has signed to Decca Records, a famous British music label, which is part of huge music production company Universal.

Singers like Taylor Swift, Justin Bieber and Adele are also signed to Universal.

The NHS choir will release their debut album 'Something Inside So Strong' on May 27 later this year.

The album will feature a cover of Ed Sheeran's song Thinking Out Loud.

Its release will also tie in with celebrations to mark the 70th anniversary of the creation of the NHS, the organisation that looks after healthcare in the UK.