Green sea turtles no longer endangered in US and Mexico 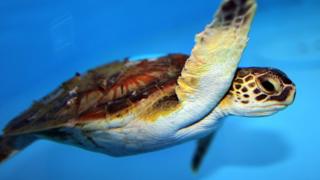 Green sea turtles in Florida in the US and Mexico are no longer an endangered species.

Lots of conservation work has meant that their numbers have risen steeply over the past forty years.

In 1978 there was just a handful over the green turtles in Florida, but now there are over two thousand nesting females.

They are still officially a "threatened" species, which means more work will have to be done to help them.

The turtles still face threats such as becoming tangled in fishing nets and the having the places that they lay their eggs destroyed.

Green sea turtles can be over a metre long and can live up to a hundred years.

Turtles released back into the sea in Peru