Rosberg wins in the desert lights of Bahrain 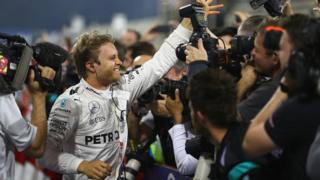 Nico Rosberg beat team mate Lewis Hamilton in the desert with an easy win at the Bahrain Grand Prix.

The German celebrated a comfortable victory after Lewis Hamilton collided with Williams' Valtteri Bottas on the first corner, and could only manage third place.

Ferrari's Sebastian Vettel's engine failed on the formation lap before the race had even started.

Victory gives Rosberg a 17-point title lead over Hamilton in the Championship.