We want your questions for England's women footballers 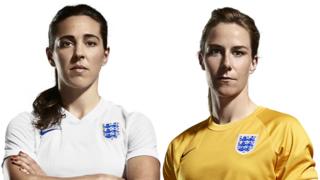 Ever wanted to put a question to two of the top players from England women's team? Well here's your chance!

Newsround will be speaking with midfielder Fara Williams and goalkeeper Karen Bardsley later this week and we want your questions.

Fara is the most capped England player ever - she's played for her country 151 times.

And, goalkeeper Karen Bardsley has 58 caps and has also played for Team GB at the London Olympics.

Now, the Lionesses are getting ready to face Belgium and Bosnia-Herzegovina in the qualifiers for the Euro 2017 competition.

What's your question for Fara Williams and Karen Bardsley?

Thank you for your comments - this chat page is now closed.

When did you start playing football and when were you first scouted for England?

Your captain is Steph Houghton. What does she do and how do you help her?

Why did you first decide you wanted to be a footballer?

Who is the best player that you have ever played against?

When you were nine or ten how would you have seen yourself as an adult?

If you weren't a footballer, what would you be?

Who is your role model?

Did you want to play football when you were a child?

Do you ever feel nervous before a match?

As a goalkeeper, what are your best tips to learn to dive to save the ball?

What football teams did you support when you were younger?

Do you feel like you're underestimated because you're female?

How old were you when you discovered you wanted to become a football player?