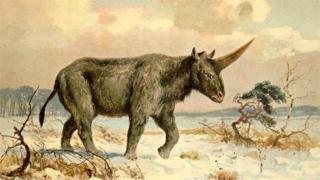 An extinct animal sometimes known as the "Siberian unicorn" lived much earlier than scientists originally thought.

They now reckon the creature died out around 29,000 years ago.

Researchers at Tomsk State University worked this out after finding a skull of the animal in Kazakhstan in Asia.

Before this discovery, they thought the creature lived until about 350,000 years ago.

The animal's scientific name is Elasmotherium sibiricum and looks more like a furry rhino than the unicorns we read about in books.

It was about two metres tall and five metres long.

The scientists are now trying to find out how it was able to survive so much longer than they used to think.

Fossil of ancient giraffe shows it was the biggest ever