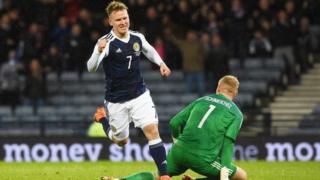 Matt Richie jumped on a mistake from Daniel Agger in the Denmark defence to hand Scotland victory at a half-empty Hampden.

The Bournemouth winger scored after eight minutes, but Scotland were second best thereafter.

Craig Gordon's excellence in goal ensured a second 1-0 win in a row.

There were encouraging debuts for John McGinn, and 18-year-olds Kieran Tierney and Oliver Burke.

SNS
Kieran Tierney (centre) made his debut for Scotland, starting the game at the age of 18

The newcomers and the result will have pleased Scotland manager Gordon Strachan.

It was lucky, though, that Denmark created chances but were not good enough to put one of them away.