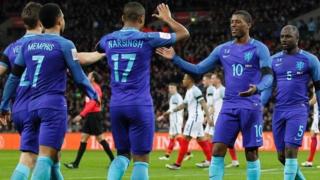 England were beaten in a friendly by the Netherlands, who have not even qualified for Euro 2016.

Three days after England's thrilling victory over rivals Germany, a much-changed Three Lions side slipped to a rare defeat at the national stadium.

Man-of-the-match Jamie Vardy rounded off a great passing move to steer in Kyle Walker's cross four minutes before half-time - but Roy Hodgson's side could not protect their lead.

PA
England have friendlies against Turkey, Australia and Portugal before Euro 2016

England's defence were eventually punished for sloppy play when Danny Rose handled the ball, and Vincent Janssen scored from the penalty spot after 50 minutes.

The big striker was then too strong for defender Phil Jagielka before crossing for Luciano Narsingh to score the winner 13 minutes before the final whistle.

Daniel Sturridge to start against Netherlands in friendly

How football is helping girls affected by war in Iraq