Daniel Sturridge to start against Netherlands in friendly 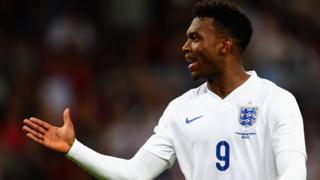 Liverpool striker Daniel Sturridge will make his first England start in 18 months when they host the Netherlands in Tuesday's friendly at Wembley.

The 26-year-old missed the entire Euro 2016 qualifying campaign with injury.

"No-one doubts his quality. His goalscoring record is unbelievable," said his Reds team-mate James Milner, who will captain England on Tuesday.

Roy Hodgson is set to make changes from Saturday's 3-2 win in Germany, with keeper Fraser Forster to start.

The Three Lions manager refused to confirm whether Danny Drinkwater would start, saying the Leicester midfielder "might" make his debut.

Netherlands, who finished third at the 2014 World Cup, have not qualified for this summer's Euro 2016 finals in France.

Ireland through to Euro 2016 after play-off win