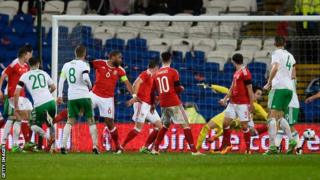 The fixture provided an opportunity for less well-known players to show their skills, in the hope of being included in the squads for Euro 2016.

Despite being hit by injury, Wales defended well, managing a goal-less first half, with a free-kick by David Cotterill being saved by Michael McGovern.

But Craig Cathcart gave Northern Ireland the lead an hour in.

If Northern Ireland had managed to hold on to their lead, it would have been their first win in an away friendly since they beat Finland in august 2006.

But Simon Church equalised for Wales with a penalty in the 89th minute.

Four of the last six meetings between Wales and Northern Ireland have ended in draws.