Stampy: I struggle switching off my tech before bed

Stampy admits he has struggled to switch off his tech before going to bed.

"The big problem for me is generally whenever I'm looking at a screen I'm doing something that is very engaged," he tells Newsround. "I'm either playing something, editing or writing.

"You need some time to tune down and relax before you try and go to sleep."

His YouTube channel of gaming videos has more than seven million subscribers.

Newsround's latest special programme, Is Tech Taking Over?, challenges a group of kids to survive three days with little or no tech - while their classmates had unlimited access.

Stampy says he's noticed that spending a lot of time looking at screens can cause him to have trouble sleeping.

"I know that the light that screens give out can sometimes trick the brain into thinking that it's still daytime but it isn't," he explains.

"I think that being very switched on and actively thinking just before bed is a bad idea." 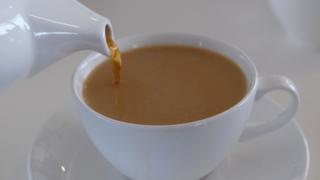 Stampy drinks "a lot" of tea

Stampy uses his love of tea to make himself take a screen break.

He says he goes to make a cuppa, or talks to someone or plays with his cat.

He also advises to keep checking the time to see how long you've been on your tech.

"At least an hour before bed just try not to look at a screen and not do anything too active mentally."