Send us your questions about what has happened in Brussels 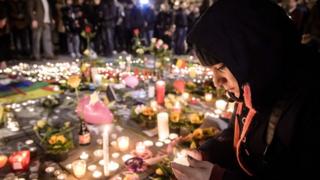 EPA
A vigil for the victims was held in the Place de la Bourse, Brussels

A number of attacks have taken place in Brussels, the capital city of Belgium.

A minute's silence has been held in the city and lots of people have been leaving messages, flowers and candles in tribute to those who were hurt or killed.

Some of you might be feeling a little bit worried about what has happened, so we are asking BBC security expert Frank Gardner to try to answer as many of your questions as possible.

If you have any questions about what happened in Brussels, send them to newsroundcomments@bbc.co.uk and we'll ask BBC security expert Frank Gardner to answer as many as he can.