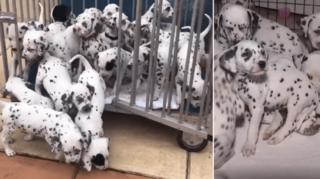 It's not quite the 101 Dalmatians - but it feels pretty close!

A Dalmatian in Australia called Melody has given birth to 19 puppies, setting a new world record.

Melody's owner, Melissa O'Brien, said that her pooch piled on a whopping 15 kilograms during the pregnancy.

This was the first sign that the litter would be a big one, although Melissa didn't think her dog would end up with so many puppies.

Dogs use their eyes to make us do what they want!

Melody gave birth to nine female and 10 male dogs, all of which have been named after Disney characters.

The pups were born without their trademark spots, but Dalmatians' spots develop a few weeks after they are born.

Check out this record-breaking tongue! It belongs to eight-year-old Mochi, a St. Bernard from South Dakota, USA.

Mochi is a rescue dog and her owners said it was "love at first sight" when they saw her.

But it isn't all fun and games having a tongue this long. Mochi has a lot of slobber to deal with and sometimes her tongue can make it difficult to breathe easily.

She still seems pretty happy and her family certainly love her a lot!

A Japanese dog called Purin has won her second world record, by travelling 10 metres on a ball, in just 11.9 seconds.

She adds it to her other world record, from 2015, when she proved her great paw-eye coordination by catching 14 balls in one minute.

The dogs and their owners stretched and twisted in an hour-long 'doga' (dog yoga) session in Hong Kong, China, to be part of the biggest ever doga class.

Otto skated his way into our hearts in 2015, when he skateboarded through a 'human tunnel' of 30 people.

The bulldog was cheered by a huge crowd in Peru and was given an official certificate for his achievement.

Jiff, a Pomeranian from Los Angeles, USA won fans in 2014 for an unusual talent.

Despite having four legs, Jiff prefers to get around on just two - he stands up on his back legs, or balances on his front, like a handstand.

And as if that wasn't enough, he's speedy as well! He can travel five metres in just under eight seconds on his front paws, and is even quicker on his hind legs, doing the same distance in less than seven seconds!