There have been a number of attacks in the city of Brussels, the capital of Belgium.

There were two explosions in Zaventem Airport on the morning of March 22, followed by another at Maalbeek metro station.

Thirty-one people have died and many more have been hurt. 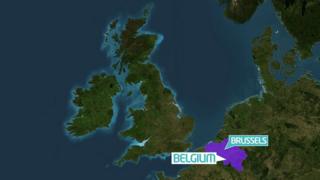 The attacks happened in Brussels, the capital of Belgium

How is Belgium responding?

Three days of national mourning have been announced and a minute's silence has been observed.

Belgian Prime Minister Charles Michel said: "This is a day of tragedy, a black day... I would like to call on everyone to show calmness and solidarity."

Police and emergency services worked quickly to help those who were injured. All public transport in Brussels was shut down for much of the day.

Read this advice if you feel upset by the news.

Since the attacks, hundreds of messages of support for the people of Brussels have been chalked across the Place de la Bourse, a central square in the city.

As well as the chalk messages, which are written in many different languages of the world, flags have been displayed and flowers and candles left.

How is it affecting the UK?

There's extra security at some airports to help keep people safe in the UK and other European countries.

British Prime Minister David Cameron has held a meeting to talk about how to keep the UK safe.

He said Britain would "do everything we can to help". 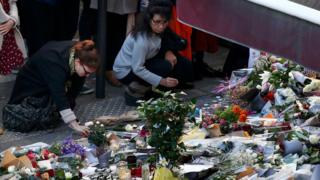 Reuters
People in Paris leave flowers after the November attacks

Are the attacks linked to what happened in Paris?

In November 2015 several attacks took place across Paris, the capital of France, in which 130 people died.

Some people think that these latest attacks may be linked to the Paris ones, but we don't know for sure.

The group that calls itself Islamic State has claimed responsibility - it also carried out the Paris attacks.

Last Saturday police in Belgium caught a man they think was involved in the Paris attacks.

They are now looking to see if what happened in Brussels is linked to that arrest.

US President Barack Obama has offered Belgium any help necessary in investigating the attacks.

There's more advice here on if you're upset by the news.

Tribute messages in chalk left for the people of Belgium