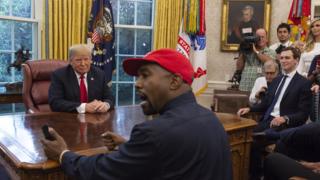 US rapper Kanye West has said he is running for president.

In a tweet West, who goes by the name of 'Ye' said: "We must now realize the promise of America by trusting God, unifying our vision and building our future.

"I am running for president of the United States!".

It's not clear whether West's tweet is serious, as he has missed the date to register in some states.

If Kanye was to run, he would be going up against the two main candidates - the current president Donald Trump and Democratic Party nominee Joe Biden.

If he is serious, he's left things pretty late, normally running for president takes months of hard work, political campaigning, and a lot of money. Kanye West has just over four months.

So what does it take to be elected president? And what's in store for whoever finally gets the job?

Who can be president? 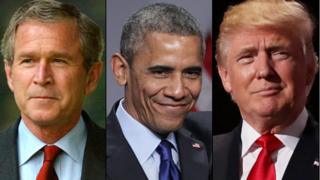 It doesn't matter if you are a man or woman, or what race or religion you are. However, there are certain things that you have to be, or have done, in order to be in line for the job. These are:

Normally, a person wanting to be president would have worked in politics before, but this doesn't have to be the case.

The most recent President Donald Trump is better known for being a successful businessman.

His supporters thought that it was time that somebody who wasn't a politician was given the job.

While Ronald Regan, who was US president in the 80s, was a Hollywood actor before he was voted into the White House.

So, despite being a rapper, Kanye West could in theory run for president.

How do you become president? 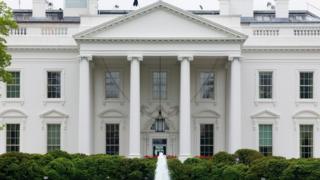 The White House in Washington DC is the official home and workplace of the President of the United States. But who will be living there next?

The American people decide who will be their president by voting.

A presidential candidate has to convince a lot of people that they would make a good president or are even able to win the race before getting the job.

Once the candidate has announced that they want to be president, they need to persuade a party to let them represent them. The Democrats and Republicans can only choose one person to enter the competition to be president.

This is done through a series of votes called primaries and caucuses, which take place across the country in the first half of the election year.

Next the candidate needs to win the support of people called delegates, who are people in their political party who have the power to vote for them to be a presidential candidate. After the primaries and caucuses comes a big meeting called the party convention. At this, the delegates vote for who they like and both parties officially announce who they have chosen to represent them in the election.

Then a running mate needs to be chosen who will be vice-president if the candidate wins the election.

This year, Donald Trump who represents the Republican Party is hoping to win the election in November in order to get a second term as president.

Joe Biden, who was Barack Obama's vice president, is the candidate representing the Democrats.

In Kanye West's case he could try and secure the backing of a smaller political party. Without it, he could try to appear as an independent.

But deadlines for registering that way have already passed in some states, including New Mexico and North Carolina, which are key areas for anyone wanting to earn enough votes to be president.

Once it's been decided who is running for president, there are weeks of hard campaigning, lots of money has to be spent on advertising, travelling for many hours, giving many speeches and working extremely hard all over the country.

The people of America then have to vote!

If the candidate wins this vote, they finally become president and officially start the job on 20 January the following year.

What does the US president actually do? 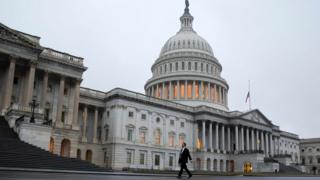 Reuters
The president works alongside part of the government called Congress, which you will find in this building called the Capitol, and the Supreme Court to run the country

The US president is perhaps the most important person on the planet, and it is far from an easy job running one of the most powerful countries in the world.

He or she suggests laws and how much money the country should spend. That person is automatically made commander-in-chief of the US army and generally responsible for how the US deals with other countries. They also oversee the national US government.

The president also chooses the judges who will work in the Supreme Court. Although, the Senate has to agree to these.

Everything you do and say as president is very carefully watched. There will be many people who will agree with you, but many that don't - so the president must be ready to receive a lot of criticism throughout their time in the job.

It's certainly not easy!

Donald Trump: How the US president travels, and other cool ways leaders get around

212 comments
Back to top
unknown