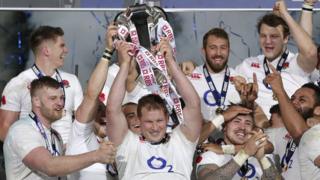 England have won their first Six Nations Grand Slam in 13 years after beating France 31-21 in Paris.

It's the first time England have won every match in the Six Nations since 2003.

Elsewhere, Wales ended their Six Nations on a high, finishing second and thrashing Italy 67-14 in Cardiff.

And Ireland finished a challenging tournament beating Scotland 35-25 in Dublin.

What do Year 7 rugby players think about tackling?