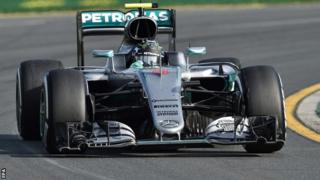 EPA
Nico Rosberg won the first race of the new Formula One season.

It was the first race of the new Formula One season and Hamilton had started off in pole position.

He had a bad start and dropped down to sixth place, before finally finishing second.

The dramatic race saw another driver, Fernando Alonso, crashing his car. He walked away unhurt, but the race had to be stopped for a short time.

Hamilton one race away from winning championship