In Greece thousands of child refugees are stranded on the country's border with Macedonia.

The crowded conditions in the camps are making life hard for the people forced to live there.

European leaders are meeting to discuss what to do about the problem.

Watch James Reynolds' update, from the Idomeni refugee camp in Greece, to find out what life is like for children there. 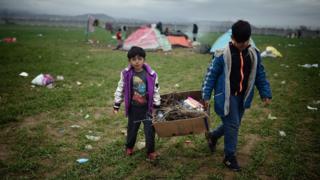 The authorities in Greece are only allowing a small number of people to cross over the border in to neighbouring countries each day.

But lot of Greece's neighbours have closed their borders to refugees which is making the situation worse.

Lots of people have fled their homes, in countries like Syria and Iraq, because of wars there

They are trying to make their way to countries like Germany. 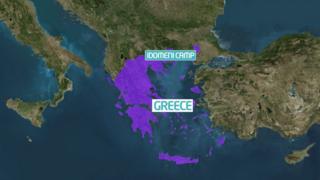 The Idomeni camp is located in Northern Greece.

There are around 46,000 refugees and migrants stuck in Greece because of the border shutdown.

Around a third of them are living in bad conditions in a camp called Idomeni.

The camp was planned for 2,500 people but now holds over 12,000 people which makes it very crowded. 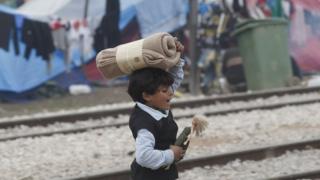 AP
A child plays with a doll while carrying a blanket at the Idomeni camp.

What is being done to help?

The leaders of the European Union, the club of countries that Britain is a member of, have been talking about how to help resolve the problems occurring in places like Greece.

European leaders are talking with Turkey, a country which is not a member of the European Union, but very close to Greece.

They hope that Turkey will help take more responsibility for looking after refugees.