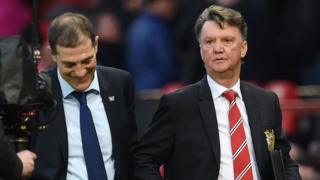 The FA Cup semi-final matches have been announced.

Everton will face either Manchester United or West Ham in the FA Cup semi-finals, while Crystal Palace will take on Watford.

The ties will be played on the weekend of 23-24 April at Wembley.

Manchester United are hoping to equal Arsenal's 12 Cup wins if they go all the way, while Everton are looking to be the joint-ninth most-successful side, lifting the trophy five times.

Watford, who knocked out Arsenal, will be trying to reach the final for the first time since 1984.

Palace are through to their first FA Cup semi-final in 21 years.