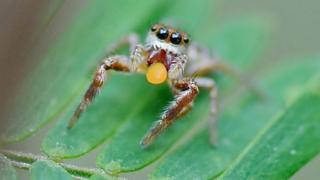 New research has shown that as well as eating insects, toads and small mammals, some spiders also like to eat plants.

A team of scientists from Switzerland, America and the UK teamed up to research the eating habits of certain species of spider.

They discovered that spiders from 10 different families were eating nectar, sap, honeydew, leaves, pollen and seeds from things like weeds, shrubs, trees, grasses, ferns and orchids. 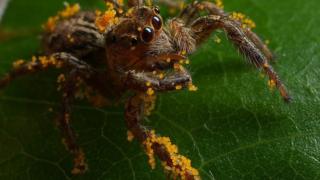 The spiders who ate the most plants were the 'Salticidae', or the jumping spider family.

The lead scientist Martin Nyffeler from the University of Basel thinks that the reason why the spiders eat plants might be to help them to avoid going hungry when there aren't as many insects around and to give them have a balance of different nutrients from the food.