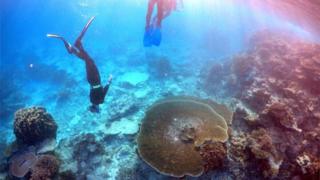 Authorities in Australia have raised the threat level for coral 'bleaching' in the Great Barrier Reef, after divers found that lots of coral had died.

The Great Barrier Reef is the world's largest living structure, and is home to thousands of plants and animals - it is so big it can even be seen from space.

Divers have found that an increase in the sea's temperature has been putting the coral which grows there under a lot of stress causing 'bleaching', which means a loss of colour. 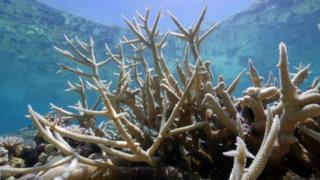 Many types of coral have a special relationship with tiny algae that live in the coral.

These tiny algae produce about 90% of the food the coral needs to grow, and give them their bright colours.

Bleaching happens when sea temperatures get too high or low, causing the algae to get 'stressed out' and leave the coral.

This turn the coral white and leaves it very vulnerable.

An increase of just one degree Celsius for four weeks can cause bleaching. If this continues for more than eight weeks, the coral can die.

Has this happened before? 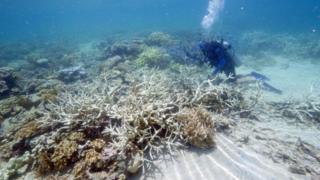 In 2002 the surface temperature of the sea water in the Great Barrier Reef increased by around 2-3 degrees causing one of the worst bleaching incidents on record, affecting more than 60% of the coral.

While some coral reefs can recover from bleaching in a few years, others don't recover at all.

The Great Barrier Reef Marine Park Authority have now raised the bleaching threat level, and have said that there is a very high risk of mass coral bleaching this month.

The Australian government said it is working closely with the marine rangers to help keep an eye on the coral for the next few months to see how it is doing.

Great Barrier Reef loses half of its coral