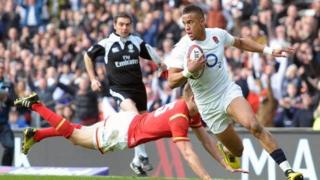 Rex Features
Watson's try was his 10th in 19 international appearances

England survived a late scare to beat Wales in the Six Nations rugby tournament in an epic match at Twickenham in London.

The victory also sealed the Triple Crown title, which England did by beating Scotland, Ireland and Wales in this year's tournament.

Eddie Jones's team will head to Paris next weekend with the possibility of beating every team they have played, which is called a Grand Slam.

Only a heavy defeat against France will stop them from picking up their first Six Nations title since 2011.

A first-half try from Anthony Watson and three penalties from Owen Farrell established a 16-0 half-time lead as the hosts took control.

A charge-down try from Dan Biggar gave Wales hope but, with England's Maro Itoje outstanding, Farrell's boot appeared to have calmed any nerves.

Two tries in four minutes from George North and Talupe Faletau changed all that, and in the final moments North almost powered free again.

But England escaped, and Eddie Jones' first season in charge may yet end in triumph.

Not since 2003 have England won the Grand Slam, and while they have been hammered in their past two deciding matches, they will start as favourites against a struggling France.

They could even be crowned Six Nations champions on Sunday, with France needing to beat Scotland at Murrayfield to take the title race to the final weekend.

What do Year 7 rugby players think about tackling?