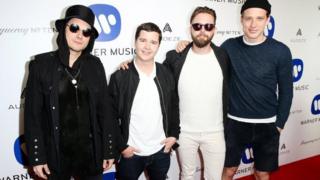 Lukas Graham stay at the top of the UK singles chart, spending a fifth week at number one with their ballad, 7 Years.

The song is now the UK's longest-reigning number one by a Danish act.

It overtakes Whigfield's Saturday Night and Aqua's Barbie Girl, both of which spent four weeks at number one.

Meanwhile, Adele returns to the top of the album chart, with 25 achieving its tenth week at number one since last November.

Vote: Snack or not to snack - that is the question!