Crystal Palace put their Premier League problems on hold to earn a place in their first FA Cup semi-final in 21 years by beating Championship side Reading with two late goals.

Palace are without a league win in 2016 but will be at Wembley thanks to a Yohan Cabaye penalty and Fraizer Campbell's injury-time strike.

Reading had kept the Eagles quiet before Jake Cooper was sent off for pulling back Yannick Bolasie. Cabaye scored from the penalty spot before Campbell added a second late on. 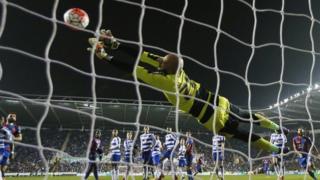 "I thought it was going to go to a replay, if I'm honest. We've won, but we've got to win in the league," said Crystal Palace manager Alan Pardew.

"A semi-final in the Cup brings an excitement to you, and we hope that rubs off on our league form," he added.