A newly discovered 250-million-year-old fossil reptile from Brazil gives an "extraordinary" insight into life just before the dinosaurs appeared.

At the time, the world was recovering from a massive extinction that wiped out most living species.

The reptile, named Teyujagua or "fierce lizard", is the close relative of a group that gave rise to dinosaurs, crocodiles and birds.

The animal is a new species that has not been previously known.

"It's very close to the ancestry of a very important group of reptiles called archosauriforms," said Dr Richard Butler, who was the co-researcher on the study published in the journal Scientific Reports.

"It helps us understand how that group evolved." 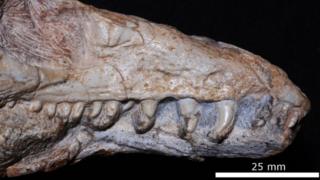 Scientific Reports
The skull of the reptile is exceptionally well preserved

Teyujagua paradoxa was a small crocodile-like animal that probably lived at the side of lakes, feeding on fish.

The ancient reptile lived just after a mass extinction event 252 million years ago that was thought to have been triggered by a string of volcanic eruptions.

About 90% of living species were lost, creating a gap for other animals, such as Teyujagua, to flourish.

The reptile - and its close relatives the archosauriforms - became the dominant animals on land and eventually gave rise to the dinosaurs.