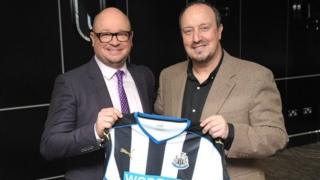 "C'mon Toon Army. The club and I need your total involvement," Spaniard Benitez said after signing a three-year contract.

Benitez was sacked in January after seven months as Real Madrid boss.

He spent six years as Liverpool manager, winning the Champions League in 2005. He also had a short spell with Chelsea, guiding the Blues to Europa League success in 2013.

Steve McClaren was sacked on Friday after just nine months in charge.

The former England boss won just six of 28 Premier League games in charge of the Magpies, who are just one place off the bottom of the table.

McClaren and his team were booed off following Saturday's 3-1 loss to Bournemouth at St James' Park - their third league defeat in a row. 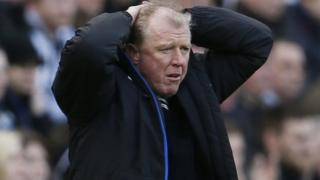 In a statement released by the club, Newcastle's managing director Lee Charnley said "I would like to thank Steve personally for his services to Newcastle United."

"He is a man of integrity and class and he has conducted himself with great dignity during this difficult time. Steve worked tirelessly to try and bring success to Newcastle United.

"He has the utmost respect of all the players, staff and management and he leaves with our very best wishes and sincere thanks," he added.