Japan is marking the fifth anniversary of the earthquake and tsunami that devastated the north-east of the country on 11 March 2011.

Prime Minister Shinzo Abe and Emperor Akihito are attending a memorial in Tokyo, and joined a moment of silence nationwide at the exact moment the quake hit.

The magnitude-9.0 quake struck offshore, creating a giant wave out at sea, called a tsunami, which grew to 10 metres high.

It also triggered the world's worst nuclear disaster for 25 years, at the Fukushima Daiichi nuclear plant. 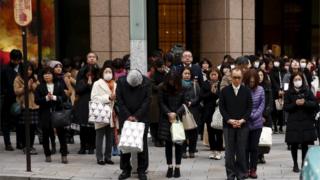 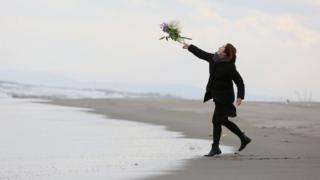 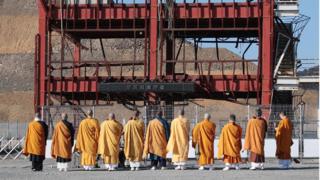 The earthquake on 11 March 2011 was one of the most powerful ever recorded.

But it was the following tsunami that claimed the most lives, as a wall of seawater powered through coastal areas of Tohoku, flattening entire towns and villages.

At 2.46pm Tokyo time (5.56am British time), the exact moment the quake was detected, people across Japan bowed their heads as a mark of respect for the victims.

Bells rang, and in the capital the underground metro came to halt.

"Many of the people affected by the disaster are aging, and I worry that some of them may be suffering alone in places where our eyes and attention don't reach," Emperor Akihito said at the ceremony.

The tsunami also damaged a nuclear power plant in Fukushima, leading to the world's worst nuclear disaster for 25 years.

Water flooded the plant, taking cooling systems offline which set off a series of meltdowns.

The disaster leaked radiation over a wide area and forced the evacuation of more than 160,000 local people.

The government has spent billions of dollars on reconstruction work, but five years on, many people have not been able to return to their homes.

How far has tsunami area come in five years? 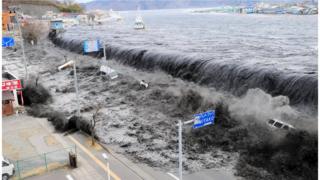 Reuters
More than 18,000 people died or went missing in the tsunami

How kids prepare for an earthquake in Japan