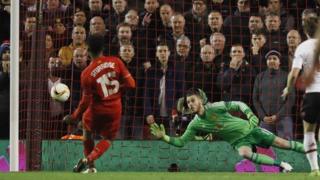 Liverpool took control of their Europa League last-16 tie as they swept aside a poor Manchester United at Anfield.

Jurgen Klopp's side controlled this first European meeting between the two Premier League giants and the German manager's only disappointment will be that the tie is not already settled.

United did not create a single chance and only the brilliance of goalkeeper David de Gea has kept Liverpool in range as he made a number of magnificent saves. 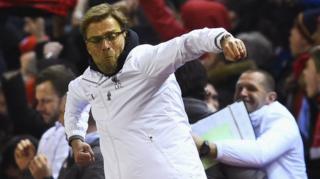 Getty Images
German Klopp has never won a European trophy, but led Borussia Dortmund to the Champions League final in 2013

Liverpool boss Jurgen Klopp praised the "electric" Anfield atmosphere after his side beat United for the first time in two years.

"The atmosphere was unbelievable, really great. I want to say thank you to everyone that was involved," said the German. 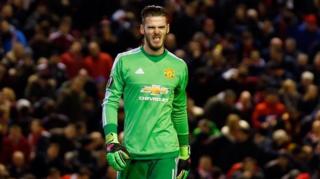 United had won their four previous games against Liverpool under manager Louis Van Gaal but rarely looked like beating them on Thursday.

The Dutchman felt the goals his side conceded were "cheap" but accepted they could not handle Liverpool's pressing game.

"In the second half, we tried to press like Liverpool. They had difficulties, but we did not create too many chances," he said.