Rhino poaching numbers increase for sixth year in a row 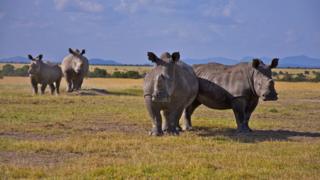 The number of southern white and black rhinos in Africa being poached has increased for the sixth year in a row.

The International Union for Conservation of Nature says just over 1300 animals were killed, bringing the total number to just under 6000 since 2008.

It is a mixed picture. South Africa which has 79% of Africa's rhinos, has seen poaching fall slightly. Their success is put down to many things including better law enforcement.

However some other countries have seen a big increase in poaching.

Overall the white rhino population is stable whilst the black has gone up slightly.

Duke speaks out on rhino poaching