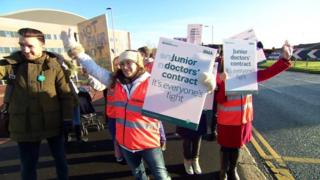 Hospitals in England are preparing for a third strike by junior doctors starting at 8.00am on Wednesday, this time for 48 hours.

This is the first of three 48 hour strikes over March and April as part of their fight against the government's plans to force a change in their pay and working conditions.

Ministers want to change the hours they work and the money that junior doctors get, especially at the weekends and overnight, but doctors say the changes are unfair.

The government says the new contract will improve services for patients but doctors are worried that longer hours will make them tired and could put patients' health at risk.

The NHS says emergency services will still be operating, but as in previous strikes, thousands of appointments and less urgent operations have been cancelled.

Why are junior doctors striking?

Why is the NHS such a big issue in an election?

Inside the children's hospital patrolled by robots

The 10-year-old who plays piano for hospital patients