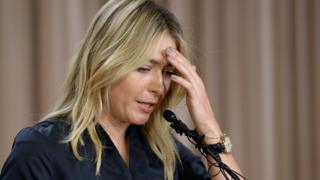 Former tennis world number one Maria Sharapova has revealed she failed a drugs test at the Australian Open.

She tested positive for meldonium, a substance she says she has been taking since 2006 for health issues.

The substance was not banned until the 1st of January 2016, Sharapova says she didn't know the rules had changed.

"I did fail the test and take full responsibility for it," said Sharapova.

"I made a huge mistake," she said. "I have let my fans down and let the sport down that I have been playing since the age of four, that I love so deeply."

Top sports stars have to give samples of urine (their wee) to be tested for any substances which could give them an unfair advantage when they compete.

Sharapova gave a sample when she was playing at the Australian Open in Melbourne and a banned substance called meldonium was found.

She admits she has been taking the drug for the last ten years but says it is for health problems she has.

It is a medicine meant for people with a heart problem called angina but athletes like it because it helps their endurance and ability to recover from big efforts.

It is on the banned list now because the World Anti-Doping Agency (Wada) started seeing it in lots of athlete's samples and found it does improve performance.

It is thought that hundreds of athletes have been using it and there are a lot more cases like this to follow.

Sharapova could ask for the test results to be allowed under rules which let athletes take drugs if it is for medical reasons.

She could be banned from playing tennis for up to five years.

Whatever happens, Sharapova says she hopes to be able to return to tennis in the future.

"I know that with this I face consequences and I don't want to end my career this way. I really hope to be given another chance to play this game."