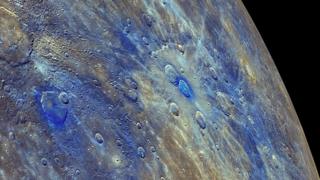 The planet Mercury may once have been covered in graphite, the same material used in pencil lead, according to new research.

Mercury's surface is very dark, and now scientists think they know why.

Scientists at Johns Hopkins University in the US think Mercury was covered in graphite when the planet first formed.

But volcanoes and huge landscape changes over billions of years had hidden the graphite from view.

Mercury - facts about planets in the solar system

Planet Earth and the Sun caught on film by satellite